⚠️ This article is outdated, please see the Middleman on Heroku – 2017 edition post for a more up to date guide on how to deploy Middleman sites to Heroku.

In case you haven’t heard of it yet, Middleman is a Rack-based static site generator built in Ruby. It’s super nice to use, but deploying it to Heroku can bit of a black art.

This guide assumes a few things:

If you don’t have it yet, you should install Middleman on your development machine:

For more details on this step, read the the Middleman documentation.

This will generate a ton of output, like this:

Ignore this for now, and just do cd clever_like_a_fox and open the project directory in your editor.

Modify the Gemfile to look something like this (the Middleman version may vary):

As you might notice, three lines have been added (ruby "2.0.0", rack-contrib, and puma). If you’re not using Ruby 2.0.0, you should set the Ruby version to the correct version.

Finally (for this step), run bundle install in terminal.

Next, we want to configure our app so that we get pretty URLs (no .html at the end).

In the config.rb file, around line #50, above the set :css_dir and set :js_dir lines, add the following:

We need to be able to give our users a nice error page if they go to a URL that doesn’t have content, so let’s create a simple 404 page file in the source folder (source/404.html):

Once again, save your changes.

We’re almost there, just a little bit of configuration left!

Create a config.ru file in the root of your project and paste in the following code:

Again, save your work.

Create a new file called Procfile in the root of your project with the following contents:

Add this line to the .gitignore file in the root of the project:

Run git init . in the root of your project, then commit all the project files:

Create a new app on Heroku:

Deploy your code to Heroku:

Open the URI given to you by Heroku, or run heroku open in terminal in order to open the site in your default browser.

You should be greeted by a site that looks something like this: 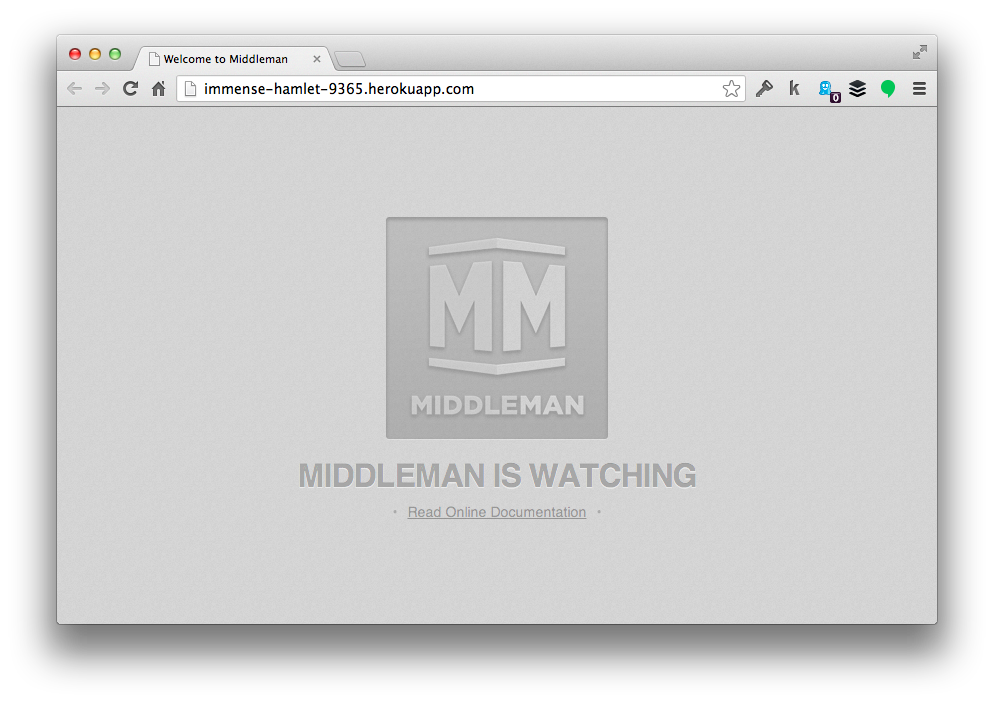 Heroku recommends using Unicorn to serve Ruby/Rack apps, but I chose Puma instead as it is simpler to configure. This will probably work well for most use cases.

The source code for my sample app is available on GitHub: matiaskorhonen/middleman-on-heroku. The code changes after each step have been tagged, in case you want to browse through the history.

By the way, you should also take a look my hobby project, Piranhas.