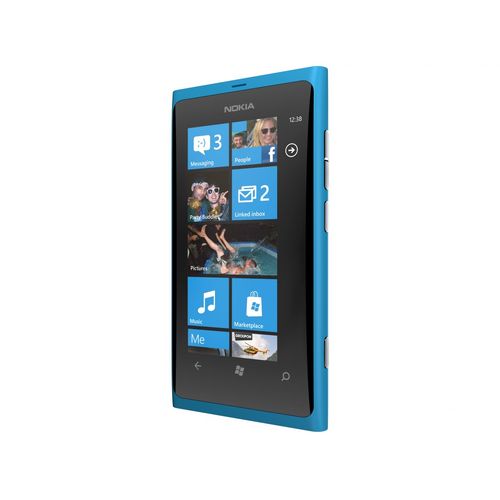 The power button on my iPhone 5 recently semi-broke (it only seemed to work about half the time), so while it was being repaired I borrowed a Nokia Lumia 800 from the device lab at our office.

These are my impressions of the Lumia 800 after using it for a few weeks (why it took three weeks for my iPhone to get repaired is another story).

Surprisingly enough the hardware itself feels very solid, despite the fact that the phone is made out of plastic (aside from the Gorilla Glass screen).

The sharp corners can feel a bit awkward while you have the phone in your pocket and the phone can be a bit slippery at times, but this is true also of the aluminium iPhone too.

The battery life seemed better than what I get on my iPhone, but I’m not sure how much of this was simply due to the fact that I used the phone less as I could do less stuff on it.

The Lumia had been updated to Windows Phone 7.8 , the latest version available for the Lumia 800

While the OS seems slick in a very minimalistic way, it also suffers from some interesting bugs and bad design choices. For example, if you want apps to remember their state when you switch back to them, you must use the application switcher (i.e. hold down the back button). If you try to switch back to the app from the start screen, you lose the previous application state. Needless to say this is extremely annoying

The selection on the Marketplace (Microsoft’s app store) is fairly poor compared to what’s available for iOS and Android. This wasn’t a big issue for me as I only had to use the phone for a short while, but it is certainly something which would be extremely annoying in the long run.

Mobile Internet Explorer 9 is nowhere near as good as Safari on iOS or Chrome on Android. The lack of @font-face support is particularly galling. IE10 on Windows Phone 8 is probably better, but I wouldn’t get my hopes too high.

I couldn’t get my 3G data connection to work straight out of the box and had to download a separate ‘Network Setup’ app from the Marketplace.

The phone also was under the impression that I needed to use data roaming in my hometown. The 3G data connection wouldn’t work if data roaming was turned off in the phone settings.

The status bar iconography is mostly pretty cryptic, as you can tell by looking through this support article: What do the icons on my phone mean?

While I didn’t run into it myself, the Lumias also have a known issue where they won’t turn back on at all if the battery has completely run out.

Would I switch permanently to Windows Phone?